Over the past 50 or 60 years, a few solidbody electric guitar models have established themselves as must-have “standards” for guitar players. A great example is the venerable Gibson Les Paul – even non-guitar players are familiar with the iconic shape and name of this guitar. There are few other guitar models that have been seen in the hands of as many legendary musicians or that have inspired as many people to want to learn to play guitar.

One has to wonder if Les Paul had any idea the legacy he was creating when he first began experimenting with solid-body electric guitar designs, or if Ted McCarty, the president of Gibson at the time of the debut of the Les Paul Model guitar, knew that what he was doing would have such long-range impact on guitar players and music lovers.

Over the years, the Les Paul has had many incarnations, ranging from simple student models to high-end luxury models – plus some very interesting “detours” along the way for models with unusual features.

It would be a tremendous task to catalog all of the Les Paul-based models and their variations in one article. But let’s take a tour of some of the significant Gibson Les Paul models produced in the 1950s, 1960s, and 1970s, with notes on how those models changed over the decades, all bookended with significant dates from Gibson history.

Les Paul approaches Gibson with his idea for a solidbody electric guitar. According to Les, “They politely ushered me out the door. They called it the broom stick with a pickup on it.”

Les Paul Model – Introduction of PAF (patent applied for) humbucking pickups, which were designed for Gibson by Seth Lover. Some guitars made in 1957 and 1958 had dark brown backs. 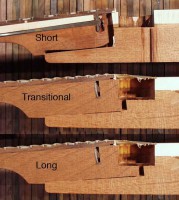